The pipe and tabor is an instrument (or two) with a long heritage.

The Tabor Pipe
The pipe half of the combination is a one-handed fipple flute or whistle (right) that may have its origins in the bone flutes of pre-history.

The English tabor pipe has only two finger holes and a thumb hole.

It might be assumed that such a pipe would have a very limited range of notes, but by using the technique of overblowing (blowing harder) to get higher harmonics, the range can be extended up to two octaves.   A demonstration can be found on our Tabor Pipe page

The Tabor
Tabor is an early name for drum. The size and shape of the drum can vary considerably. The instrument usually has one or more snares, most commonly placed across the batter head.

The Pipe and Tabor
Playing the pipe in one hand, leaves the other hand free to beat the tabor, and lo, you have the original one man band – the pipe and tabor.  As mentioned above, the origins of the pipe lay in pre-history but the combination of the two together probably only dates back to the 11th Century.

Pipe and Tabor is a generic term for a whole family of instruments. These instruments span 10 centuries and two continents

Despite the broad spread of these traditions they often have a great deal in common.

And now for some history:-

Taborers in England
Angel Taborers (players of  the pipe and tabor) are depicted in medieval churches, but first appear in the literature as court musicians. They provided music for dancing and processions.

Taboring as a tradition only just survived into the 20th Century in England as the music for Morris Dancing. It has since undergone a significant revival.

A shallow Tabor has been part of the English tradition since the C12th, but it is not exclusive. Deeper Tabors appear in the iconography throughout the
period.

Much of our knowledge of late mediaeval and renaissance pipe and tabor comes from Iconography – drawings, paintings, carvings and sculpture.  Many of these are found in churches. 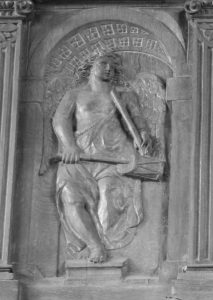 Early Bone Pipes
Some of the earliest surviving musical instruments are whistles made from bones, often with three or four holes. In Europe they are probably the most common musical instrument artefacts from the 1st Millennium.  Although there is no direct evidence of these pipes being played in combination as pipe and tabor, they are clearly an antecedent of the tabor pipe.

Other percussion
The player of the one-hand Pipe is not constrained to the Tabor as his other instrument. Since medieval times the Pipe has been played with bells, triangles, bones and other percussion.

A more harmonious alternative to the standard percussion is the ‘String Drum’. This instrument looks like a kind of dulcimer or zither, a long box with strings stretched across it. The strings are struck with a short stick. More widely known in medieval times, this instrument has survived in very few areas, most notably in the Pyrenees.